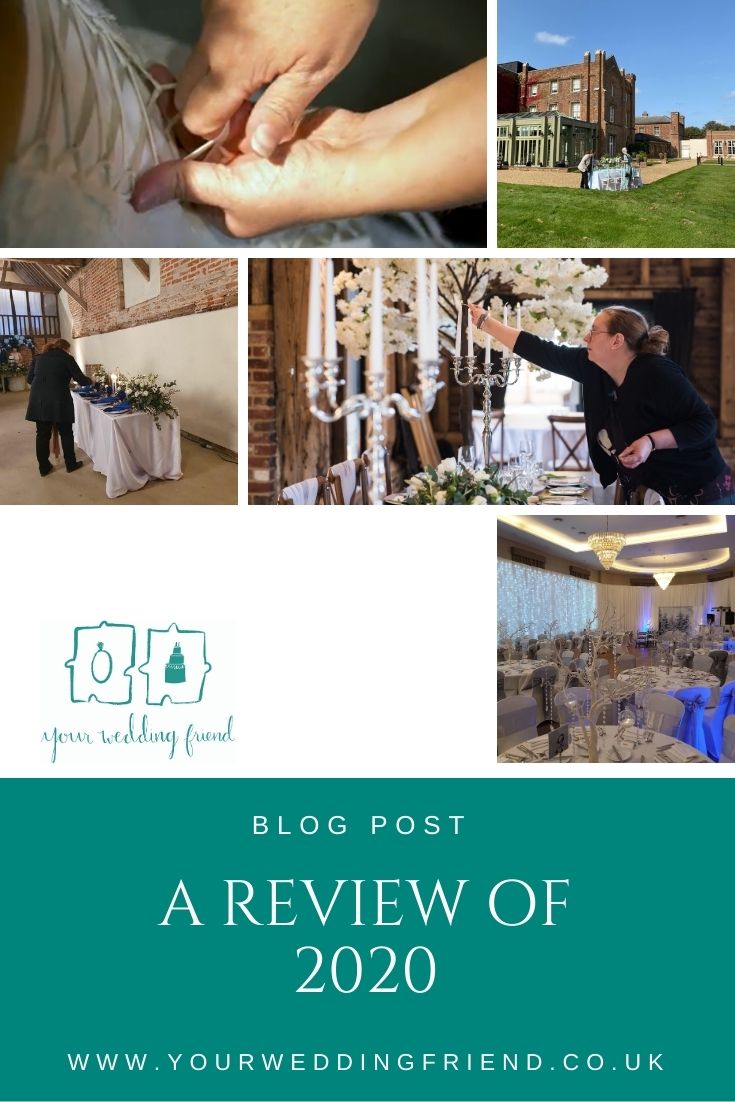 Without a doubt 2020 will be remembered as the year everything stopped. After all the planning and preparation for what was due to be a bumper year for my wedding planning services and supplier assistance, everything was put on hold as the world stood still. But that wasn't the end of it all.

The year started out so well with new enquiries and helping out new suppliers, getting to work in two new venues, plus wedding fairs and plans for so much more. But all those plans soon started to unravel. Seeing other countries go into lockdown, I knew it would be just a matter of time before we joined them. And so began the weirdest couple of months trying to figure out what to do, what a return to normal might look like and when it might start. We quickly realised that normal would be some ways off and so all my wedding bookings were provisionally moved to 2021.

October felt a bit too optimistic to me for a return to normality, but we saw some good strides in the right direction as, first small ceremonies were allowed again and then guest numbers started to increase. We went through a phase of helping people to set up virtual meetings and virtual mini commitment ceremonies at home. Then talking people through how to conduct smaller weddings, how to choose who to have and who to leave out of the guest list, and the alternative ways for people to stream their mini ceremonies.

Many suppliers think that small ceremonies are here to stay, and I agree but only for those couples who want to go small anyway. For everyone, else a large family gathering is still their preferred way to celebrate their nuptials, and I don't blame them. When we reached the heady heights of 30 people allowed at weddings we suppliers (and venues) really thought we were on the home straight towards 'proper' weddings the way our couples wanted them. It wasn't to be, but I kept busy.

I've been involved in many photoshoots this year, so lots of lovely inspiration to be seen. Some shoots took place before lockdown, others just post and in between when tiers allowed for them, all with social distancing in mind. I need my personal space so this year of encouraging people to keep their distance has helped me and many more like me. The photoshoots took me to some new venues in regions I don't usually cover, from Northampton to Essex. Some of them are featured in the enclosed image - you can see more of the images on my Instagram at the link below.

With all in-person networking cancelled, a new virtual approach was developed by my usual groups and now my membership reaches much further than ever before, so I've been making contacts with wedding businesses from Nottingham and Leicester to Dorset and Oxford. My networking connections have also been amazing for support and business advice, many of them I might never have met if it weren't for this new way of working.

From my networking I was offered an opportunity to join a group of mentors and given that the way I work is more like coaching than the traditional idea of what a wedding planner does, I leapt (with a bit of a push) into working with a new group of people. Working together we develop basic IT skills and build confidence. Helping people whilst weddings have been ostensibly on hold has been so rewarding and helped me keep my sanity and hand in.

As a champion for DIY weddings, the other thing I'm so pleased I finally pushed forward was properly launching my Etsy shop for the things I craft, and the kits I make so other people can take up crafting. I've been thrilled by the response and will be pushing forward with more makes in the New Year and a proper plan for promotions.

Personally, 2020 has been a challenge for my own and my families mental and physical health. Like many of you, not knowing what the future might hold and how long we'd be in lockdown, took its toll. Added to that, after a period of being locked down I suddenly struggled with not wanting to go out at all. As a family we've personally dealt with more hospital admissions than ever with various ailments and broken bones - thankfully not COVID related but still severe and worrying and all whilst no visitors were allowed. Thankfully everyone seems to be on the mend so we're hopeful for a better, healthier year ahead. Finding that my networking family were there to support us, often free of charge, has been a much-needed lifeline. I'm also grateful that we'd planned a big family get together at the beginning of the year, although had we known what was to come I'm sure we'd all have hugged each other that little bit harder. Our family zooms have got slicker and I'm pleased to say I even won a couple of the quizzes. We've missed some major milestone birthdays and anniversaries, but we're all so grateful that the technology has allowed us to stay in contact as much as we have.

After all the challenges that this year has bought, I'm hopeful for better times ahead for us in 2021. Wishing you health and happiness for the year ahead. X