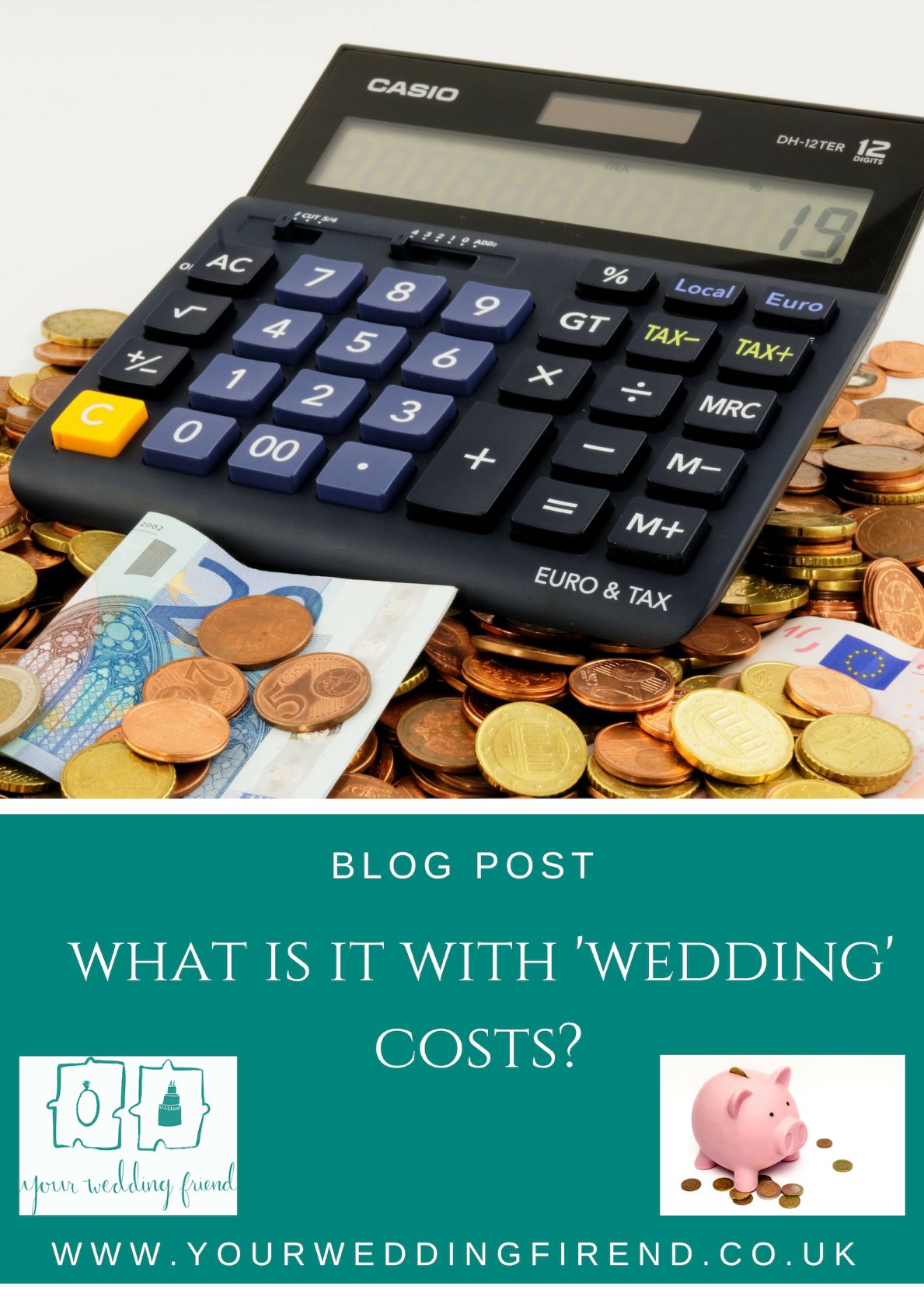 What is it with 'wedding' costs?

There's a general belief that all suppliers bump the prices up when you mention the word 'wedding'. Without a doubt there are people within the industry looking just to make money out of weddings, however there are also many legitimate reasons why weddings are more expensive than a party, but more importantly most suppliers are just looking to provide a service and be paid a reasonable wage for it. In this blog I'm looking at some of the reasons why prices are where they are in certain areas, and I'll be looking at other areas at a later date.

I frequently hear how 'outrageous' it is that a cake should cost so much but have you stopped to consider how much effort goes into creating a one-of-a-kind work of art? The average cost of a plain three-tiered cake is around £300 depending on the type of decoration you choose. A plain fondant covered single-tiered cake with a ribbon wrapped around it is going to work out more cheaply than a three-tiered one with hand decorated details such as sugar flowers, pipework, sculpture, etc. which all takes lots of training. Also if you really want to push the ability of the baker into something they've never done before then they will need to bill you for the amount of time they will spend researching and experimenting. A really intricate cake can take a week to create or a whole team of people, even on minimum wage that's worth more than £300!

So everyone has a camera on them at all times now, that doesn't mean that everyone is Annie Lebowitz. If you want the best in the business you have to pay for it. Again a good photographer will have trained, may even be accredited, and built up years of experience and knowledge. Think about how many hours you're asking them to work for you, especially if you expect them to be there from the 'getting ready' shots right through to the first dance - 12 hours? 15 hours? Then they go away to review, edit and prepare your photographs ready for you to view, maybe they're putting them into a fancy album for you (or multiple albums). All that editing etc takes time, that is in addition to the day of the wedding. You might only be paying for 500 images but the photographer will have taken many more than that and has to review each one.

Firstly a birthday party is NOT the same as a wedding, there are a lot more hours and moving parts involved in a wedding. Also it's highly likely that you will be using several parts of a venue for a wedding (ie ceremony in one room, then drinks served elsewhere, photographs, then the wedding breakfast then the evening reception) which will require more staffing input than a birthday party does. Even if everything takes place in one room, unless you are doing it all yourself, staff will be needed to change the room around for each activity. The cost of a wedding venue will also often include a wedding co-ordinator or someone to act as master of ceremonies, where-as a party is usually much more self-contained. One final point is this, many venues have had some experience of a wedding party that went wrong and they prepare for the worse - ie have additional staff/security on standby. The bad ones can ruin it for the good ones but from a venues point of view if a bad wedding party really kicks off it isn't just their reputation that can be ruined but even the fabric of the building itself.

All food is not created equal. A buffet will always be cheaper than a 3 course sit down meal not just because of the ingredients but for the sheer amount of staff time required to prepare and serve a hot meal. Similar issue with canapes; they may look like a buffet on trays but they are being handed out by staff and are often fiddly mini versions of hot food items, so again are time and staff heavy to produce.

Gents suits are often not far from what you'd usually expect and options now are reaching far beyond the old penguin suit. For the ladies though you're probably looking at buying the fanciest dress you're ever likely to wear and that comes at a cost. A high-end designer creating a bespoke gown will obviously be more expensive than an off-the-rack dress. However, there are also skilled but relatively unknown dress designers out there who can create a bespoke outfit for you at a fraction of the cost of high-end, as well as shops that offer bargain end-of-line dresses. This one is a case of do your research. Most boutiques only hold dresses by certain designers, a relative few of them may have their own lines. Many of them will have 'end of line' sales where you can buy off-the-rack at a much reduced rate to the label price, but bear in mind that end-of-line means they will not be able to get that dress in a different size as it's no longer being made. Lace and beaded dresses will often work out the most expensive as the fabric has a much more complicated manufacturing process. Bear in mind though with shop dresses, the price on the label is just for the dress, it doesn't include the cost of alterations/fittings. There are also high street stores, charity shops and on-line ways to bag a bargain.

There are unfortunately some unscrupulous suppliers out there; some will lie about their skills or over charge because they think they can get away with it, some will under charge and not deliver, but before you assume this to be true Do Your Research. If you know the average price for a service that's a great starting point but bear in mind the above and think about what you're asking for. If you're still not sure about a supplier or how to tell the good from the bad, I can help you. If you have any questions about a suppliers charges and want to know how they compare, I'm happy to answer them for you. X