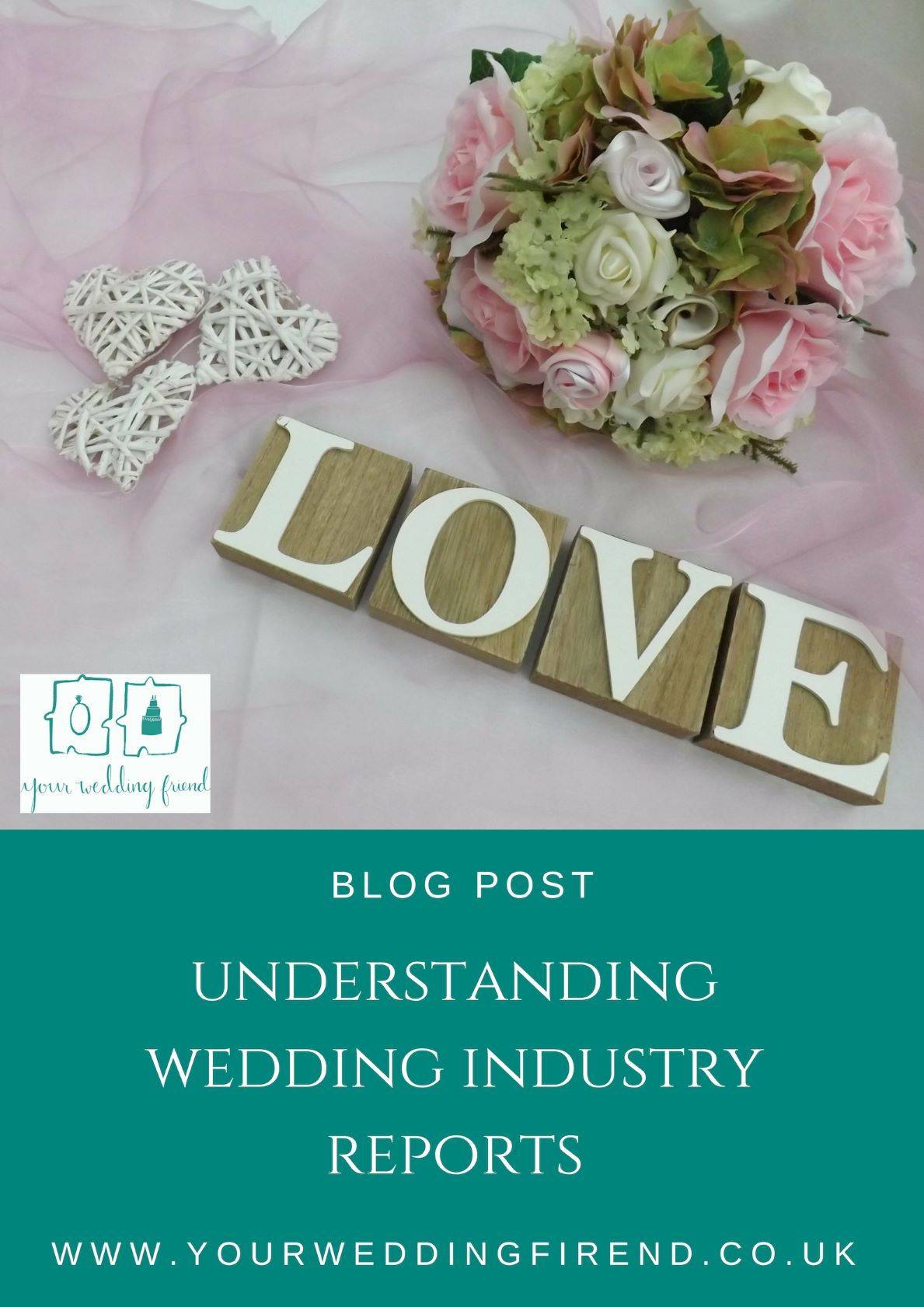 Understanding the wedding industry reports - beyond the headlines

Each year the UK wedding industry releases a set of reports on how it's doing and every year the average cost of a wedding seems to go up, which is what gets picked up by the main stream press, but that's only part of the story. With this blog I'm looking at what the figures and information means for suppliers and couples alike.

So ok, let's start with the headline.

Yes, wedding spend seems to be getting higher every year, which in light of everything makes it quite a daunting prospect for anyone planning a wedding. There is one big thing to bear in mind with these reports though, the devil is in the detail. Most of the couples I meet don't have anywhere near the 'average' suggested budget of £30,000, however those sorts of totals are based on if you had every service on the list (NB some services aren't even listed at all!).

The real average, ie the one where you take into account the bits that everyone takes off their wedding planning list (let's face it you don't necessarily need a car if your whole wedding takes place in one location), is more like around £17000. Now don't get me wrong, I know for a lot of people that figure too will be a pipedream. The point is, your wedding doesn't necessarily need to cost that if you shop wisely and understand the kinds of fees and charges you might be looking at for each service. These reports will help you get an idea of a fee, though you won't necessarily be offered that exact price by every supplier you meet - I have and am writing whole other blogs on the different reasons for this.

Another quick thing to bear in mind

These reports are broken down by regional averages, but the headlines always go for the top price, which is usually the south east of England. If you live outside of the south east you might find the average in your area is much lower, this is because suppliers in different areas may have slightly different prices. Scotland and the North East often come up as the cheapest regions to get married in the UK.

There are good things shown in these reports too though.

The fact is, people are still getting married and in increasing numbers not decreasing ones, which is great for everyone. I believe that having more freedom to have your wedding the way you want it, and soon pretty much anywhere you want it, will only mean that more people will decide to have the wedding they dream of, what ever their budget. It may even mean that these top figures start to come down rather than keep going up as people move away from the traditional hotel ceremony and reception with a three-course meal and chose a festival style wedding on the beach with a barbeque instead.

Don't let the headlines distract or dishearten you.

It's okay not to be average. Use the details in these reports to give you ideas and ignore the rest. I know some suppliers are also disheartened by these reports, for them some of the averages don't reflect their own average prices. The thing is we don't really know exactly how these averages are reached. If the bulk of those responders had a basic service rather than something more detailed and complicated it would bring the average down. If you're paying above the 'average' for a service consider what you're getting for your money, it's possible you're being offered way more for your money than the bulk of the interviewees wanted.

These reports include the couples who bought simple versions of a service like an off-the-rack dress from Monsoon or a cake from Marks & Spencers. Readers need to understand that you cannot compare the off-the-rack service to a bespoke one, think of it like this: you can go to Debenhams and buy a handbag for £30 or you can go to Prada and spend £800+, at the end of the day it's still a hand bag, however if you want designer, you pay designer prices - and if you go for a knock-off you may well be wasting your money. You decide where you spend your money but don't expect to get Prada on a Debenhams budget.

New reports are due out any day now so keep your eyes peeled over on my Facebook page for updates - link below for the 2018 Bridebook report. X